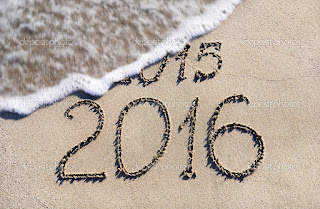 The most important seed that I could have planted for 2016 happened at the end of October, 2015, when I finally made the physical move back to Nevada. I feel as if a great weight has been lifted, and I can now move forward with purpose. I was blessedin that the house that I rented, sight unseen, is both a lovely home, and located close to everything that I need (including thge DMV!).

I do not do New Year's resoutions, as, in my humble opinion, they are an epic fail. My version of life is to set goals for the coming year, and check in on those goals on a periodic basis, to make sure that I have not strayed from my path. My first goal for 2016 is not one that I had planned, but one that came up unexpectedly. Close to the end of February I will be getting a lens inplant in my right eye. Long story - the short version of which is that when I had the cataract surgery on that eye, the ten year study had not been finished, and my opthamologist could not implnt a lens. My second goal is to clean up my finances so that I can purchase a home before the end of the year. This is where my major energy will be going.

As far as writing goes, I will continue my work with The Cartomancer, write a column here once a month, write flash fiction on a consistent basis, and look for short story contests to enter. I need to work on myself over the next year (I am still unpacking "stuff"), so that tghe person in the mirror and the one in my mind carry the same image.

I am also contemplating doing an imspirational deck, with quotes on each card that reflect different life areas. That will evolve over time, and may take a couple of years to come into print. I already have a good idea who I will have carry this deck, and that for me is a major part of this journey.

On January 13th I will be attending a free teleclass by author Eleanor Brown on setting writing goals for 2016. I very much am looking forward to this event, which I see as a good way to firmly anchor my writing in 2016, and a way to connect with another writer. That all important networking!

Wishing you all much success in 2016!