The Legend of Justice and Diamonds - Second Printing 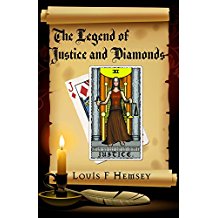 "The Legend of Justice and Diamonds" was originally published through Xulon Press in 2010. It is now available through Create Space and Kindle (The Legend of Justice and Diamonds). (You can find my review of the first printing here.) I was (and still am!) drawn to this book because it takes its foundation from the Tarot, which has been a a part of my life "forever". The book presents the cards as both living virtues, and living human beings, fashioned by The Creator. The background is that of what author Louis F. Hemsey terms "first Earth" - the time before Earth as we know it.

The voice of the story is Acellus, The Creator's scribe. He is also the first angelic being. Through his visions, the reader moves into the past, into what is termed an alternate reality, where it is the sixth year reign of the first King - a rogue entitled the King of Clubs. The story exemplifies the eternal struggle between good and evil, and moves smoothly between three realms - (1) the Forest of Cards, (2) the earthly realm of the Kng of Clubs, and (3) the realm of the Keepers, the ones who read the Tarot cards.

As an author myself, I am imressed with the manner in which Hemsey moved his work from Xulon Press to the independent publishing venues of Create Space and Kindle. The addition of a dlightful new cover spices things up nicely!

I have it on good authority (Hemsey himself!) that a sequel is in the works - involving the son's of the Jack of Diamonds and the Ace of Spades, along with the Queen of Diamonds and Lady Arabella of Saxon.

Now is a good time to read (and savor) the first book, so that you have the background handy for reading the sequel!