Books and My Family 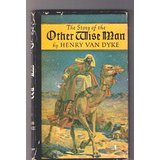 My Auntie Vee had a tremendous influence on my life, even though I seldom saw her. She grew up in the mid-west (North Dakota and Minnesota), took care of her mother after her father died, and became a teacher. She eventually moved to California, earned a further teaching degree, and taught there until she retired. She was a gentle lady that carried a great deal of wisdom about her. When I was going through my mother's things, after w moved her to a senior care facility, I found one of my Aunt's books. I ran across it again recently, and took a good look at it. It is a small book (77 pages), that carries a huge punch!

The name of the book is The Story of the Other Wise Man, by Henry Van Dyke. I was astounded when I looked on Amazon.com, to find many versions of this book. Well, I may not want to say many versions, but the publication dates are different, and the covers are different. It seems that what I have in my hands is copyright 1895 by Harper & Brothers, with a second copyright of 1923 by Henry Van Dyke.  My Aunt has written her name, and the date she got the book (February 1946) in the front of the book.

That it belonged to my Aunt makes this book precious to me - the story itself adds to the feeling that this is something to cherish. The story is about a fourth Magi, called Artaban. He sawthe same heavenly signs as the other Magi, and he carries his own gifts for the baby Jesus (a sapphire, a ruby, and a pearl).  On the way to Jerusalem, he stops to aid a dying man,and is left behind. His life becomes a journey of search for Christ. His need to help others acts as a barrier for accomplishing that goal.

This is a well written, gently written book, writtenin story format. I recommend it for all.

But this is not meant to be a book review, it is meant to be thoughts on what books can mean to us, especialy when handed down through family. I remember when I was living in Hawaii, sharing a very small house with three roommates. In the living room was a set of encylopedias. books that came with their own story. They were the only thing left that one of my roommates had to remindhim of his deceased father.  They meant the world to him.

What books have been handed down in your family, and what do they mean to you? For me, books are a strong part of my journey, and my story.

Email ThisBlogThis!Share to TwitterShare to FacebookShare to Pinterest
Labels: Aunt, family, fourth Magi, Henry Can Dyke, The Story of the Other Wise Man