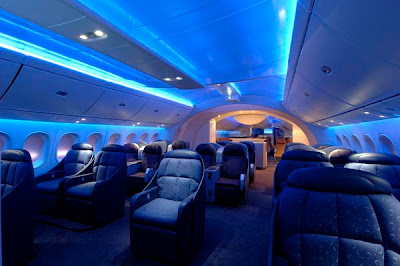 I have been trying to think of ways in which I could make the Birth Card pairs come to life. I thought that it might be fun to have a Birth Card pair chatting over coffee or drinks. I was going to work with the gentlest Birth Card pair that I could find, just so the conversation would be, shall we say, a “nice, quiet one” Best laid plans, and all of that. The first two individuals that choose to speak were the ones that were the hardest for me to write about – The Devil and The Lovers. They choose to speak over drinks … fair warning! Today's Birth Card pair are Death and the Emperor. Outspoken individuals - they know their way around life!

Scene: In flight, from Dallas to New York City, on the luxurious new Boeing Jumbo Jet. There are two seats by each window, and a widely spaced row of seats in the middle of the plane, with aisles on either side. While this is not the inaugural flight for this line of planes, they are new enough that the passengers flying them are still very excited, and somewhat in awe. The two men speaking today represent Death and the Emperor. The younger man, resplendent in an Armani suit, complete with Richard James tie and Patek Phillipe watch, represents Death. The older man, in a conservative Knot Standard suit, with a custom tie and Cartier watch, represents the Emperor.

The two men were sitting on the right hand side of the plane, just in front of the wing. They were buckled in, waiting for takeoff. Their bags were stowed in the nearest baggage compartment - there were no overhead baggage compartments on this plane, which was a blessing. Boarding had gone super fast, and they were assured that deplaning would go just as fast. The stewards and stewardesses were courteous – even a bit formal. This was no ordinary plane.

The older man, Edward Caldwell, was seated next to the window. He shut down his laptop, and placed it under his seat. Noting this, his younger companion, Stefan Molinare, did the same. It had been a long day, and it was time to allow life to slow down - at least for the duration of the flight.

The fasten seat belts sign was on, and the head steward began the in-flight spiel about where the exits were, what to do in case of an emergency, how the face masks worked, etc. It was obvious that people were paying close attention, while appearing not to. This was a new plane, and there were new rules. Holding on to the past would get one nowhere on this flight – the plane had been totally redesigned, for both comfort and utility. Nothing was where it was on the old planes.

Finally, they were in the air, and the stewards were going quietly from person to person, offering choices of wine and mixed drinks, along with small appetizers. Both men choose flutes of Crystal, along with miniature crab cakes.
Edward leaned back slightly in his seat, stretching out his legs. “So, Stefan, how do you think we are doing?”

Stefan was quite for a moment, then he spoke. “It looks as if things are going according to plan. I knew this was going to be where my energy would be needed the most, but I had no idea how many people were so far behind where they should be.”

“This is a time of change for the human race, you know. Whenever one era ends, and another begins, our work intensifies. Our mandate is to teach them to detach from the physical world, to let go of their expectations, and then to balance that with accessing their own ability to analyze, make informed decisions, and take informed actions. They are indeed coming into their own power, and those who are meant to take leadership positions must do so now.”

Stefan took a sip of wine before responding. “I would have thought that gifting them with 9/11 would have gotten their attention. That was one of my better moments, or so I thought at the time.”

Edward responded: “Yes, it was one of your better moments. We worked in sync, with me behind the scenes, flooding the area with rescue workers, and quietly getting out the individual stories. The whole thing went rather well – there was a world-wide response that was quite gratifying.”

“But then the Fool had to intervene, with Madoff and the rest of that financial crisis!”

“Stefan, you do know that the Fool was out of time. People were not listening, they were living lives that had zero relation to reality, and it was getting worse fast. Something had to be done. And the Magician eventually stepped in, with the bank mergers and government assistance.”

“Edward, the Magician was and is walking a fine line with the bankers and the government. I don’t blame the Devil for coming up with SOPA and IPA as distractions.”

“I rather think that you advised him on that, Stefan. I can see your fine hand there. The Internet is old enough to have a past, and fresh enough to have a future. Some things already need to be released so that others can take their place. And, there is the added effect of bringing people together, and refocusing their energies.”