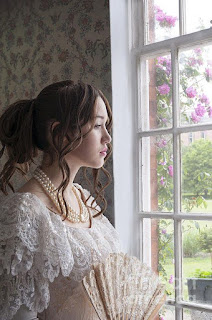 This is my (prompt) contribution to the "Finish The Story" collaboration.

Prompt: “One never knew with Eleanor. Appearances could be deceiving – one moment she was very calm, the next … not so.”

One never knew with Eleanor. Appearances could be deceiving - one moment she was very calm, the next ...not so. I have known her for many years - ever since she married my best friend, Frederick Lancaster. He was away on business in Philadelphia for six months, and when he returned he brought Eleanor back with him, as his bride.

She was very beautiful, and always dressed in white. She seemed to become part of the household quickly. The household staff seemed to be a bit afraid of her. Frederick was very protective of her - although, looking back, was he protecting her from something, or protecting others from her.

On good days she would spend her time reading, taking walks in the garden, or simply gazing out the window. On bad days, she would spend all of her time playing the piano, lost in her music.

There was a lavish Christmas party the third year they were married. The house - a huge Victorian - was decorated with wreaths, bows, flowers, candles, and a six foot Christmas tree. I can still picture Eleanor coming down the stairs, in that vivid red dress. Eleanor always wore white. Nothing but white. The guests were astounded, but said nothing. One never knew what to expect from Eleanor.

There was a lovely seven course dinner, complete with several different wines. This was followed by music from a string quartet, and dancing until the wee hours. The last the staff saw of Eleanor and Frederick is when they went up the stairs to their respective rooms.

The next morning, when Frederick's valet went to wake him, he found him dead in his bed. No appearance of foul play. His physician was called, and an autopsy was performed. It was declared a natural death, even though Frederick had no known illnesses.

Upon learning of her husband's death, Eleanor grew very pale and agitated. Fredrick's physician, who was also her physician, gave her something to calm her. She never returned to a normal life. She ate little, talked to no one, and played the piano for hours on end, as if it was her only salvation.

Eleanor essentially became a living ghost - pale, fragile, never leaving the house. She had a nurse with her at all times, at the request of her physician.

I never knew if Eleanor brought about Frederick's death in some way, or if he did so himself. Neither his physician nor I believed that it was a natural death, but there was nothing that we could prove. Eleanor could be very deceiving.


The "Finish The Story" collaboration was organized by Tanmay Jain